I see that my answer to the question What’s the meaning of Base SDK, iOS deployment target, Target, and Project in xcode gets lots of views, so I think I need to elaborate more about it 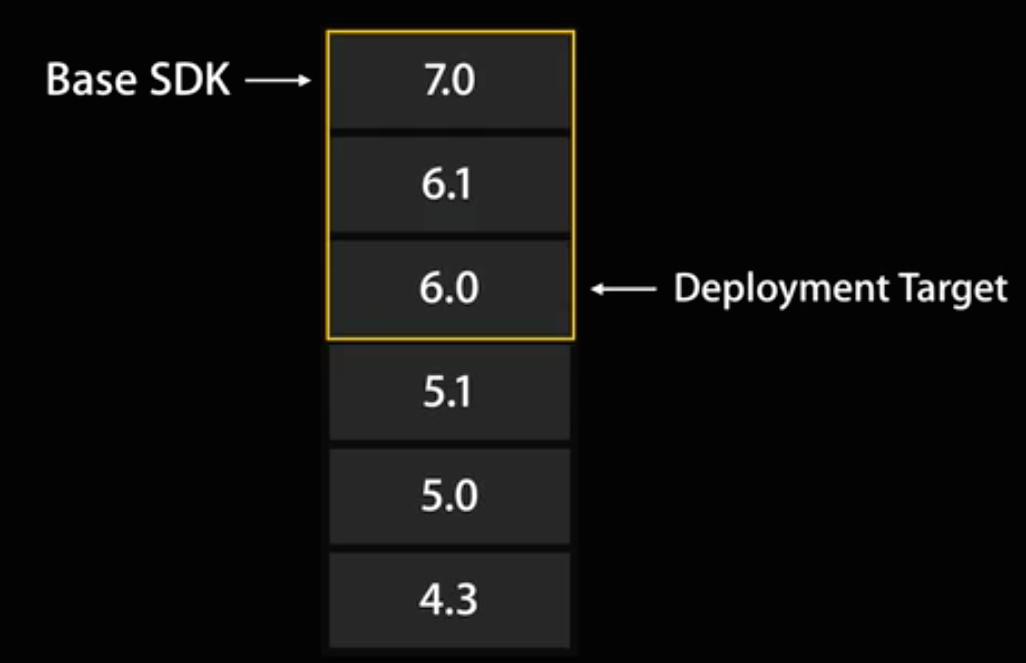 What does it mean#

So, a modern App might use iOS 9 as the Target SDK, and iOS 7 as the deployment target. This means that you can run on iOS 7, iOS 8 and iOS 9, and that you have available to you any iOS 9 calls when actually running on iOS 9.

The libraries in an iOS or OS X SDK are stubs for linking only; they do not contain executable code but just the exported symbols. SDK support works only with native build targets.

So the SDK is just like stub and header only. It means that we can use certain APIs, but on OS that does not have the real symbols for those APIs, it crashes

Swift 2 introduces available construct that guards against failure when trying to use newer APIs.

Note that available is runtime, not compile time. All the code is inside your executable

For example, suppose in Xcode you set the deployment target (minimum required version) to “OS X v10.5” and the base SDK (maximum allowed version) to “OS X v10.6”. During compilation, the compiler would weakly link interfaces that were introduced in OS X v10.6 while strongly linking interfaces defined in earlier versions of the OS. This would allow your application to run in OS X v10.5 and take advantage of newer features when available.

None of the (platform) frameworks is really “included in the bundle”. Instead, your app has a reference (“link”) to a framework once you add it to the “Link Binary with Library” build phase. The frameworks are pre-installed on the devices. When you run an app, all the app’s framework references are resolved by the dynamic linker (on the device), which means the framework code is loaded so your app can use it.